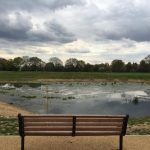 How do you describe the strange limbo feeling when life slows down and everything around you fades away into insignificance?  No-one teaches us what to do when life as we know it crumbles and we are left in the midst of ruin. Society has little time for our pain and yet we cannot see outside of it.  We impose time limits and expectations on how long one is supposed to suffer.  Slowly, as I emerged from my own grief, I made a list of what I learned along the way and which I would like to share.

I learned that my feelings cannot kill me,  they will heal me.

I learned that sometimes it’s ok to just switch off and have a duvet day.

I learned that closure doesn’t mean having all the answers and to live with not knowing.

I learned that I can play the “blame game” till I’m blue in the face but that I became a stronger person when I stopped asking “why me?” and start asking “how is this blame helping me?”

I learned that I have a lot more to learn about myself.

I learned that the answers I was seeking outside of myself were to be found within.

I learned that there nothing as precious as now, even if it doesn’t seem like it at the time.

I learned that I can never know what each day is going to bring but at it’s close,  it’s up to me to know what the day brought.

I re-learned the value of a moment.

I learned that the pain does gradually subside.

I learned how to reach out to others.

I learned that crying is healing.

I learned there are no rules around how to grieve.

I learned that life is a journey, not a destination.

I learned that however long the night, the dawn will break.

We use cookies on our website to give you the most relevant experience by remembering your preferences and repeat visits. By clicking “Accept”, you consent to the use of ALL the cookies.
Cookie settingsACCEPT
Manage consent

This website uses cookies to improve your experience while you navigate through the website. Out of these, the cookies that are categorized as necessary are stored on your browser as they are essential for the working of basic functionalities of the website. We also use third-party cookies that help us analyze and understand how you use this website. These cookies will be stored in your browser only with your consent. You also have the option to opt-out of these cookies. But opting out of some of these cookies may affect your browsing experience.
Necessary Always Enabled

Performance cookies are used to understand and analyze the key performance indexes of the website which helps in delivering a better user experience for the visitors.

Analytical cookies are used to understand how visitors interact with the website. These cookies help provide information on metrics the number of visitors, bounce rate, traffic source, etc.

Advertisement cookies are used to provide visitors with relevant ads and marketing campaigns. These cookies track visitors across websites and collect information to provide customized ads.

Other uncategorized cookies are those that are being analyzed and have not been classified into a category as yet.